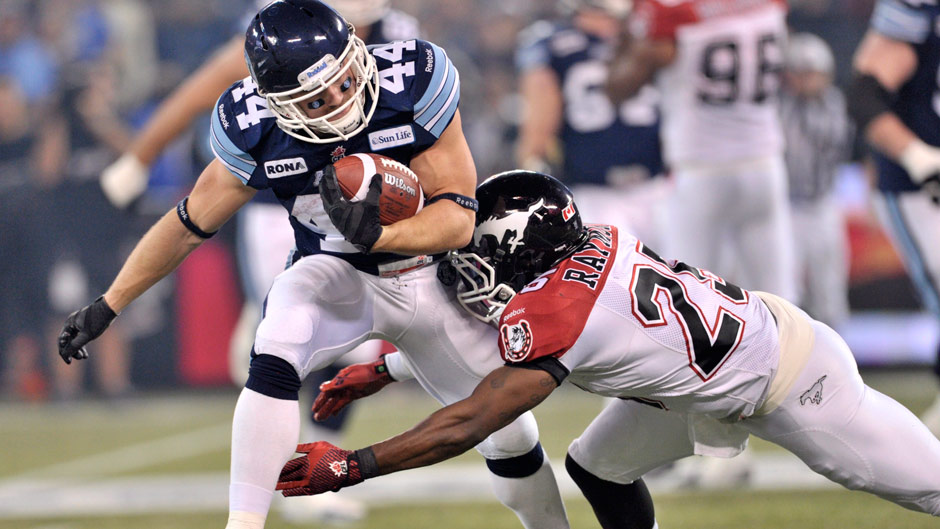 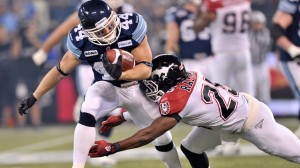 All week the story of the 100th Grey Cup had been pointing to Chad Owens.

On Sunday night, Chad Kackert stole the script and ran with it.

The Toronto Argonauts running back, who didn’t become a starter until after Cory Boyd was cut in mid-August, turned pre-game predictions he would be the X-Factor into reality by leading the Double Blue to a 35-22 victory over the Calgary Stampeders in the 100th Grey Cup, at the Rogers Centre.

Yes, the truth was out there, and it was found both on the ground (20 carries for 133 yards) and in the air (8 catches for 62 yards and a 195 overall total) for the New Hampshire-grad, who had bounced around a pro career looking for a home until he arrived in Toronto last year.

Well, he’s home. And he has the game Grey Cup Most Valuable Player award to put on his mantle piece.

After scoring two majors in the first playoff game against Edmonton, Kackert added 139 yards on the ground in Montreal in the East final. That kind of output opened things up for quarterback Ricky Ray then, and it did the same in the championship game.

A first half of 101 yards from Kackert begat a second half of 94 on this Sunday, and it was more than enough to bring the silver chalice home to Toronto for the first time since 2004, and 16th overall.

Ray, winning his third Grey Cup in four tries and his first for the Argos since being traded over from Edmonton last December in one of the most lopsided deals in CFL history, was 18-for-30, 231, two touchdown passes and a pick.

Chad Owens, the league’s Most Outstanding Player who had been held in check by the Stamps in two regular season games, again struggled to pile up the yards, getting 103 from catching and run backs.

Quarterback Kevin Glenn, always second choice for Calgary coach John Hufnagel as long as Drew Tate was healthy, and a man who had an outstanding year in relief, was just 14 of 27 for 222 yards, no touchdowns and an interception that went back for a touchdown.

League top Canadian Jon Cornish was a non-factor with 15 carries for 57 yards.

Rene Paredes provided the bulk of the scoring for the West champs, going 4-for-4 in field goals.

Chance for Calgary was there

Trailing 27-11 into the fourth quarter, Glenn was given a chance on a questionable pass interference call to Ahmad Carroll, who television replays suggested did not actually touch Maurice Price.

Again, as had been the case all game when prosperity came to call, the Stamps refused to answer and settled for a three, making it 27-14 with 9:46 to go.

Andre Durie wrapped things up by taking a short dump pass from Ray for a seven yard major at 9:38 of the fourth, making it 34-14 and sealing the deal. That score had again been set up by a long run from Kackert.

Calgary added a meaningless touchdown from Maurice Price in the final minute of the game.

The teams had traded field goals in a third quarter that might have turned things around for Calgary if they had remained mistake free.

One example saw the Stamps, down 21, spring Larry Taylor for an apparent 105-yard touchdown return off a kickoff. Keon Raymond was caught holding, however, and it came right back.

That kind of night.

Half to forget for Calgary

Turnovers and poor play selection turned the first half into a nightmare for the Stampeders.

Both teams struggled on offence to open the game, so it made sense a turnover might help Toronto, given they led the league in giveaway-takeaway.

Glenn handed the ball to Cornish at his own 45 and the CFL most outstanding Canadian fumbled it, recovered by Ricky Foley (who would go on to be the game’s top non-import).

Even then, the Argos looked to be stalled until a bad face mask penalty gave them 15 extra yards from where, two plays later, Ray rolled in desperation to his right, found Owens as his outlet man, and the diminutive runner skipped by a defender to score the opening touchdown for a 7-0 lead.

Finding nothing from Cornish, Glenn instead dropped a nice outlet pass into Taylor’s hands and the Stamps’ own little guy danced down the right side for 42 strong yards.

It came for naught again, however, when the Toronto defence swamped Cornish and Calgary settled for a 30 yarder from Paredes to make it 7-3 into the second quarter.

Stamps had just 48 yards in total offence to Toronto’s 78.

Glenn opened the second 15 deep in his own end, mixing up a pass route for Mo Price who was no-where near the ball. Pacino Horne said hello to the little pigskin and ran it back 25 yards for the pick-six and it was suddenly 14-3 for the Argos.

All 14 of those points came off Stamps turnovers.

Next time Glenn had the ball back, he tried to force one into triple coverage and almost had another pick on his hands as Jordan Younger got the paws on it but couldn’t squeeze.

Later, Calgary was third and one just inside Toronto territory and went for it, handed off and turned it over.

The Stampeders couldn’t even stare fortune in the face without turning away. Bad Toronto tackling on a pass to Nik Lewis sent him 42 yards to the 25. That looked promising until a second down in the shadow of the posts went horribly wrong.

Glenn looked downfield, saw nobody open and rolled to his right on what turned into a naked bootleg stopped by Ejiro Kuale, resulting in a field goal.

Ray came right back, using Kackert’s skills to set up a deep pass that went to Dontrelle Inman on a corner pattern that beat Brandon Smith and put them on the one.

Potential trouble. Last week, Toronto’s offence embarrassed itself on three straight shots from the one against Montreal. Kackert going nowhere this week on the first try was a nasty piece of déjà vu.

Time for something new. Backup QB Jarious Jackson actually rolled out, found a wide-open Inman (Calgary was shocked as well) and he danced in for the 24-6 halftime lead.

Argonauts corral Stampeders for Grey Cup on home turf added by admin on November 25, 2012
View all posts by admin →