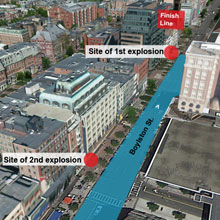 Two deadly bombs exploded near the Boston Marathon finish line on Monday, killing at least three, injuring more than 130, and severing the limbs of a number of people, police and hospital officials say.

“It is a criminal investigation that is…a potential terrorist investigation,” FBI special agent Rick DesLauriers said in a news conference.

Earlier, U.S President Barack Obama cautioned that “we still do not know who did this, or why. People shouldn’t jump to conclusions before we have all the facts.”

So far, there has been no word on the motive or who may have launched the attack.

However, following Obama’s remarks, one White House official said that “any event with multiple explosive devices — as this appears to be — is clearly an act of terror, and will be approached as an act of terror.”

Boston Police Department Commissioner Ed Davis said that at least three people were killed in the blasts but that they won’t have specific figures about casualties until Tuesday. There were reports that one of those killed was an eight-year-old boy.

The Associated Press reported that eight hospitals said that they are treating at least 134 people. Of those, at least 15 are in critical condition. The injuries ranged from cuts and bruises to amputations. Many victims suffered lower leg injuries and shrapnel wounds. Some suffered ruptured eardrums.

Dr. Richard Wolfe, chief of the department of emergency medicine at Beth Israel Deaconess Medical Center, says one or two of the hospital’s 21 patients faced a “high probability of mortality.”

Dr. Peter Fagenholz, of Massachussets General hospital, said Monday that his hospital had treated 29 patients and that eight were in critical condition. Many of the injuries were to the lower limbs.

He added that they were seeing signs of shrapnel-type injuries, but didn’t couldn’t say if it was from the explosive devices.

Earlier, Davis said that around 2:50 p.m., simultaneous explosions occurred near the finish line — about 45 to 90 metres apart — that resulted in “multiple casualties.”

The twin blasts shattered windows and sent dense plumes of smoke rising over the street. Emergency workers and National Guardsmen assigned to the race for crowd control began climbing over and tearing down temporary fences to get to the blast site.

Davis said that no other explosion devices have been found so far, but that any parcel left along the race route is being treated as suspicious.

Boston police said an incident at the John F. Kennedy Presidential Library and Museum that was initially thought to be another blast was being treated as a fire and not believed to be related to the two bombings.

‘Crying as they fled the chaos’

Competitors and race organizers were crying as they fled the chaos. Bloody spectators were being carried to the medical tent that had been set up to care for fatigued runners.

Roupen Bastajian, a 35-year-old state trooper from Smithfield, R.I., had just finished the race when they put the heat blanket wrap on him and he heard the blasts.

“I started running toward the blast. And there were people all over the floor,” he told The Associated Press. “We started grabbing tourniquets and started tying legs. A lot of people amputated. … At least 25 to 30 people have at least one leg missing, or an ankle missing, or two legs missing.”

“They just started bringing people in with no limbs,” runner Tim Davey, of Richmond, Va. told the Associated Press. He said he and his wife, Lisa, tried to keep their children’s eyes shielded from the gruesome scene inside a medical tent that had been set up to care for fatigued runners, but “they saw a lot.”

“They just kept filling up with more and more casualties,” Lisa Davey said. “Most everybody was conscious. They were very dazed.”

According to the Boston Marathon website, 2,078 Canadians were listed as entrants among the 27,000 people in the race.

Michael Doyle, a Canadian who was in the marathon, said he heard sirens and “quite a bit of commotion” on Monday afternoon. “Then I heard there were two explosions, one of them close to the finish line, another further up.”

“As I was making my way closer to the scene here, it was a mixture of people who were very upset and crying, and who seemed to be cognizant of what was going on, and those who I think were completely unaware of the situation,” he said.

“There are people who are really, really bloody,” McLean said. “They were pulling them into the medical tent.”

Calgary’s Kirsten-Ellen Fleming had been watching the race near the finish line and then headed into a restaurant on the corner of Boylston and Newbury streets.

“We were coming out of the restaurant and there were two big explosions and a bunch of smoke…It was just immediate chaos and mayhem and confusion,” she said.

“Everyone was just in utter shock and looking around.”

Some runners were still going and confused, she said. “Within a very short amount of time, minutes, there were just sirens everywhere. It just sounded like an absolute war zone. People were crying, on the pavement, like sitting down with their head between their knees. Everyone was on their phone, obviously calling loved ones to let them know they were OK.”

Marathon runner Lisa Bentley described the initial explosion to CBC News, saying she “heard this big explosion, and then felt the ground shake.”

Bentley, who believes she was between 100 and 200 metres from the finish line, said that “very soon after” she felt another big bang, followed by more shaking.

“We didn’t know what had happened at all – we just started seeing the lights and the sirens and the emergency vehicles and we thought we’ve just got to get away from here, so we kept walking away from the finish line,” said Bentley, who had already finished the race at the time of the explosion.

Massachusetts Governor Deval Patrick said that there would be a heightened law enforcement presence in the city and that there may be random checks of people carrying backpacks and parcels.

He asked people to be patient, to be in a state of heightened vigilance and to report any suspicious packages, parcels or suspicious activity.

Meanwhile, security precautions are in place at the Canadian Consulate in Boston.