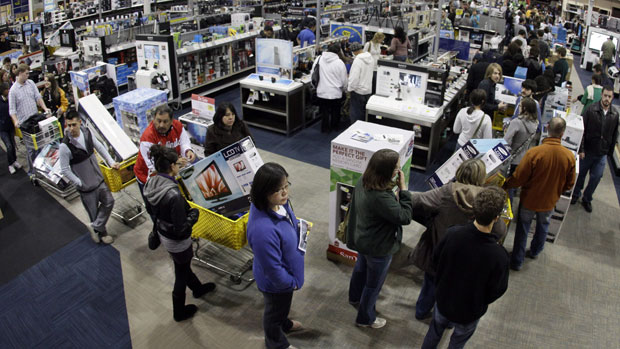 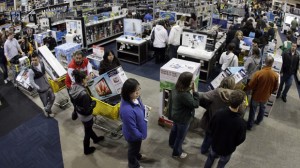 Forced to compete with the lure of even more duty-free exemptions this shopping season, more Canadian retailers are expected to jump on the U.S.-style Black Friday bandwagon in an effort to keep price-conscious shoppers from crossing the border.

While still not reaching the frenzied heights seen in the U.S., the Canadianized version of Black Friday —the annual U.S. Thanksgiving merchandise sales event — has steadily caught on in Canada over the past few years and is expected to have its biggest year yet.

“I think you’ll see, across the board, all the major players participating this year in the Black Friday frenzy,” said Ran Ravitz, general manager of RedFlagDeals.com, which keeps track of consumer deals.

“Overall, [we’re] going to see more participation with smaller chains and chains that didn’t have it last year.”

A number of the big retail chains ramped up their promotions weeks ahead of the annual event, boasting an array of four-day special sales to coincide with the U.S. long weekend.

Most of the big chains, including Best Buy Canada and Future Shop, The Brick, Sears Canada, the Gap Inc. (which includes its stable of clothing stores the Gap, Banana Republic and Old Navy) will be incorporating the Black Friday theme to entice shoppers this weekend.

In Ontario, Cadillac Fairview announced that nine of its malls will be extending their hours this Black Friday. Toronto’s Eaton Centre mall, for example, will be opening at 6 a.m.

“This is the biggest bargain hunting site in Canada and when people like that — they understand deals, they live and breathe deals —are expecting Black Friday to be big, we take it very seriously,” said Ravitz.

“We think it’s the voice of the consumer saying ‘in Canada, we should see amazing Canadian deals,’ if not there will be a lot of leakage to U.S. shopping.”

Canadian shoppers who stay overnight in the U.S. are now allowed to bring back up to $200 worth of merchandise duty-free, rather than just the $50 worth before the new rules were put in place.

Meanwhile, according to a survey conducted by Ipsos Reid for Visa Canada, nearly 44 per cent of Canadian online shoppers say they are likely to take advantage of discounts offered on Black Friday and Cyber Monday (by shopping at American online merchants — a 10 per cent increase over last year.

“So you have those retailers trying to grab those shoppers back into Canada,” says Willy Kruh, global chairman of consumer markets at business adviser KPMG. “So [Black Friday has] become a larger phenomenon.”

Vincent Power, a spokesman for Sears Canada, said cross-border shopping began ramping up back in 2007, when the Canadian dollar reached parity with its U.S. counterpart.

“I think it woke up retailers to the fact that there was something special happening on that particular weekend,” said Power, who noted that Sears Canada was one of the first of the big Canadian retailers to use the Black Friday term in its promotions.

Since then, the phenomenon has clearly grown.

Ravitz said that his firm, RedFlagDeals.com, held a survey of more than 5,500 people and found that 63 per cent of Canadians surveyed were expecting even better deals on Black Friday than Boxing Day. In fact, 2009 marked the first year the term Black Friday was searched more online than Boxing Day, he added.

“You’re seeing much more social media and technology to get the word out that Black Friday is a big deal,” Kruh said . “It’s become so ingrained in the U.S retail psyche that Canada has adopted it for competitive reasons.”

Canada has also seen an influx of new American retailers over the last two to three years. Many American companies, facing a saturated retail market at home, headed north where the competition isn’t as pronounced, Kruh observed.

As well, Canada is considered a great springboard for international expansion by U.S. firms as they can start here and then figure out their business template and other issues like supply chains and packaging.

These new American companies also bring with them the same promotional strategies from the U.S., which include Black Friday.

“Since they already have their promotions in place and their advertising in the states, they’re Canadianizing it,” Kruh said.

“So you have retailers like Amazon, Best Buy, Canadian Tire, Indigo, Sears and so on that are offering significant discounts for the week and promoting it heavily when not long a go, it was nowhere in Canada.”

Power said Sears Canada increases its sales by double digits on Black Friday, compared to what they normally do on a regular day.

“We know we’re selling some stuff at low margin. We know that. But that’s part of the entry fee for a retailer to play in Black Friday,” he said.

“We’re trying to do two things, convince Canadians they should stay at home — and price has to be part of that component. And the second thing is to try and get those who are staying home to shop with us rather than our competitors who are now all into this sort of Black Friday mentality,”

But Brent Houlden, retail consultant with the business advisory firm Deloitte Canada, said that according to their recent survey, cross-border shopping may have peaked.

It found that while cross-border traffic increased this past summer, when the customs and duty exemptions were initially increased, the surge was expected to decline “as the excitement fades.”

According to the Deloitte report, 40 per cent of Canadians said that as more U.S. retailers open stores in Canada, they will continue to cut back their level of cross-border shopping.

“Used to be you go down to the states and see retailers that were really unique and novel but now we have Abercrombie & Fitch, have Victoria Secret. We have all these players in Canada.” Houlden said.

Canadian ‘Black Friday’ fights to keep shoppers from border crossing added by admin on November 22, 2012
View all posts by admin →