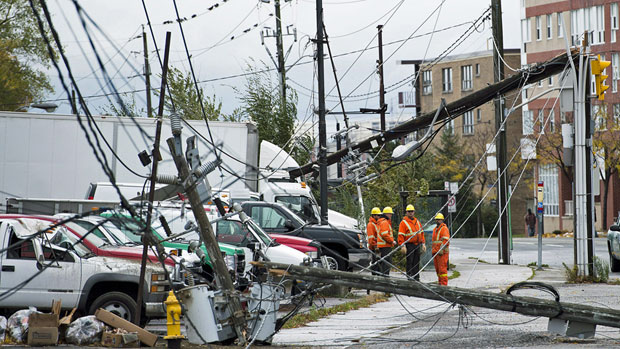 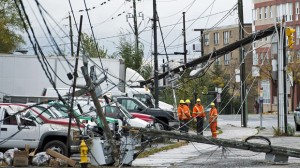 Canadian insurance companies paid out almost $1.2 billion in storm-related claims this year, according to figures released Tuesday by the Insurance Bureau of Canada.

That’s down from the $1.7 billion in insured damage seen in 2011. It’s the third time in four years that losses have reached the billion-dollar level, IBC says, as severe weather events become more common.

“The largest of the events in 2012 was the wind, flooding and hail storms that battered Calgary and surrounding areas this past August,” said IBC Alberta director Heather Mack in a statement. An updated toll of those storms has pegged insured damage to homes, cars, and businesses at $552 million.

Superstorm Sandy, which walloped southern Ontario and Quebec in late October with high winds, caused about $106 million in insured damage. A violent weather system in May that brought high winds and flooding to both provinces left about $260 million in damage.

The Insurance Bureau notes that damage to homes caused by hail or wind is usually covered in homeowner’s policies. That includes damage caused by flying debris or falling branches or trees, or damage to one’s home or contents from water entering through openings caused by wind or hail. But water damage caused by overland flooding that happens when, for instance, a river spills its banks, is generally not covered.

Damage to cars from wind, hail or water is usually covered, but only if comprehensive or all perils coverage has been bought.

The IBC, which represents the majority of private property and casualty insurers in Canada, says claim payouts from severe weather have doubled every five to 10 years since the 1980s.

“The amount of severe weather that’s impacting Canada is occurring with greater regularity,” Pete Karageorgos, manager of consumer and industry relations for IBC, told CBC News. As a result, he said insurers are having to increasingly dip into pools of money specifically set aside to cover one-off disasters, like severe storms. That “catastrophe factor” part of your home insurance premium goes up when that happens.

A report prepared for the IBC earlier this year said the rise in weather-related claims is caused, in part, by Canada’s aging sewer infrastructure which it said is “often incapable of handling the new, higher levels of precipitation.” It also said homeowners are increasingly investing in basement renovations, which increase claim costs.

Claims from water damage in Canada have surpassed fire as the number one cause of home insurance losses in many parts of the country.