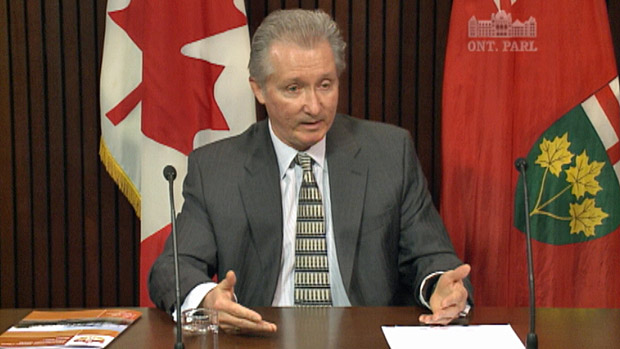 The decision to halt construction of a Mississauga power plant and then relocate it will likely cost Ontario taxpayers $275 million when all is said and done, the province’s auditor general said Monday.

Auditor General Jim McCarter released a special report on the cancellation costs associated with the gas-fired power plant that the governing Liberals halted construction on in the fall of 2011.

The controversy over the cancelling of the Mississauga gas plant and another in Oakville the year before has been a constant thorn in the side of the Liberals for much of the past 18 months.

The total costs of scrapping the Mississauga plant and moving it to the Sarnia area are about $351 million, but there will also be associated savings of about $76 million while the province is not paying for power from the cancelled plant. That leaves the net cost to taxpayers at approximately $275 million, the auditor general says.

McCarter’s investigation has determined that when the Liberals publicly announced their intention to stop construction at the Mississauga site two years ago, that created conditions that pushed up the costs.

The auditor general says that’s because the Ontario Power Authority, which plans for the long-term electricity needs of the province, was under pressure to make things happen quickly.

“We found that the OPA was under significant pressure to get the construction of the plant stopped as quickly as possible, and this likely resulted in the final cancellation costs being higher than they would otherwise have been.”

In late September of 2011, the Liberals announced that they would halt construction at the Mississauga site.

Days later, the party won a minority government and within a few weeks the minister of energy asked the OPA to begin discussions to wind down the construction efforts there.

The auditor general’s report says the OPA anticipated that cancellation negotiations with Greenfield South were going “to be challenging,” which they were. And construction actually continued at the plant for weeks following the Liberals’ announcement that they would move the plant elsewhere.

At a news conference on Monday afternoon, McCarter credited the OPA for its efforts to keep the total costs down.

But he also said that ultimately the decision to scrap the plant and move it meant that it is as if Ontario is paying for two separate plants.

“It’s our sense that the OPA made the best of a difficult negotiating situation and tried hard to relocate the plant at the lowest possible cost for the people of Ontario,” McCarter said.

“But it’s also our sense that the outcome of that negotiation definitely favoured the builder and its U.S.-based lender.”

It wasn’t until Nov. 21, 2011, that the government announced that Greenfield would stop construction. The OPA estimated at that time that the plant was then 30 per cent complete.

The two sides reached a final agreement the following July, in which the plant would be relocated and Greenfield would be reimbursed for “all design, development, permitting and construction costs” the company incurred to that date.

That same month, the energy minister announced that the plant would instead be built near Sarnia. The estimated cost for that process was then stated to be $180 million, though the minister of finance later said it would be $190 million when the cost of a litigation settlement was factored in.

Progressive Conservative energy critic Vic Fedeli said the auditor general’s report simply confirmed what the Official Opposition has been saying for months about the true costs of the cancellation.

“It’s very clear to me that they’ve known all along that the cost was far more than $190 million,” Fedeli said, in reference to prior government claims about the costs.

The energy minister said he accepted the report’s conclusions. The next step is for all parties to work to improve the process for future occasions when sites are selected for energy projects.