NDP votes to take ‘socialism’ out of party constitution 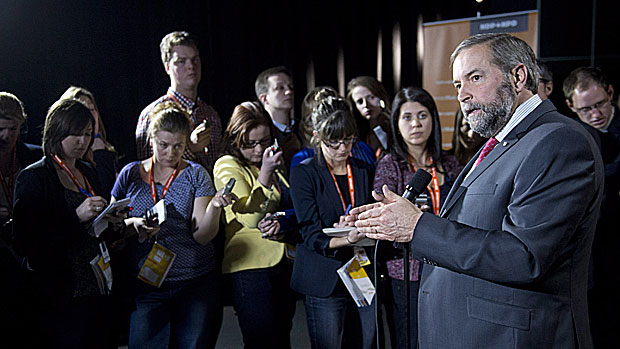 The NDP voted Sunday to take references to socialism out of the party’s constitution, a controversial move to modernize that the party had to set aside two years ago.

Delegates voted 960 to 188 in favour of the change. The result was met with cheers of “NDP! NDP!”

The move was supported by popular former leader Jack Layton, who died shortly after leading the party to its best-ever federal election result in 2011. Layton felt the party needed to modernize the preamble in order to appeal to more Canadians.

The new preamble to the constitution would be longer and refers to the party’s history as the CCF, as well as a role for government “in helping to create the conditions for sustainable prosperity.”

It also refers to seeking a future “which brings together the best of the insights and objectives of Canadians who, within the social democratic and democratic socialist traditions, have worked through farmer, labour, co-operative, feminist,” and other movements.

The issue arose at the party’s last policy convention just after the May, 2011 election, but it was sent to the federal council to revisit.

NDP Leader Tom Mulcair said he doubts most Canadians were sitting around reading the constitution of the NDP, but that it could have been an election issue in 2015.

The goal, Mulcair said, was to better communicate to voters the party’s values.

“That’s the way to connect and reach out beyond our traditional base. A lot of Canadians share our vision and our goals in the NDP. We’ve just got to make sure that by modernizing, by using the language that resonates with a wider public in Canada, that we’ll be able to do what we have to do, which is to defeat Stephen Harper.”

“I’ve always felt that social democracy was about removing inequalities in our society, so if those battles in past generations have mostly been about working conditions and on the economic, and some on the social side, I think that one of the biggest inequalities in our society today is between generations, and that’s going to be a prime battle for the next election campaign.”

Blaikie said he had opposed the changes to the preamble in 2011 because he felt it lacked a reference to democratic socialism. Now, he says, it includes language taken straight out of Layton’s letter to Canadians, released after his death.

Other speakers argued the party would appeal less to Quebec voters and said that moving the party to the centre was the wrong move.

The socialist delegates at the party’s biannual policy convention in Montreal have already been vocal critics of some of the party’s choices.

The socialist delegates voiced concern Friday over the party’s use of American Democrats as speakers. Then on Saturday, they were forced to put away a banner condemning U.S. President Barack Obama’s use of drones in Pakistan, with which they greeted other delegates as they arrived at Montreal’s Palais de congrès.

The socialist caucus is a tiny part of the 2,161 delegates at the party’s convention, but they’re making their presence felt. On Friday, socialist delegate Barry Weisleder interrupted proceedings to argue the party should take the hour provided for Jeremy Bird, who was Obama’s national field director in 2012, and spend it debating policy. He said the U.S. Democrats have nothing to teach the NDP.

The party briefly threatened to take away Weisleder’s credentials after some delegates booed Bird, meaning Weisleder wouldn’t be able to vote at the convention, but “reviewed” the situation and decided against it.

NDP votes to take ‘socialism’ out of party constitution added by admin on April 15, 2013
View all posts by admin →