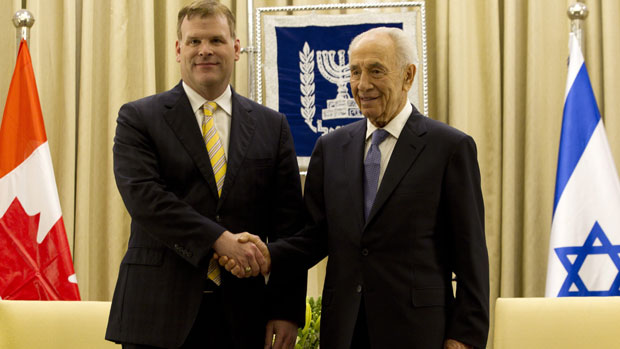 The Palestinian Authority on Sunday summoned Canada’s envoy, Katherine Verrier-Frechette, to a meeting to convey “strong dissatisfaction” over Baird’s visit with Tzipi Livni in a territory that the Palestinians and the United Nations consider occupied land, CBC Middle East correspondent, Derek Stoffel reports.

“As occupied territory under international law … most diplomats shy away from meeting Israeli officials there,” Stoffel said. “So when Baird decided to cross the Green Line, it left Palestinians livid.”

Israel does not recognize that East Jerusalem and the West Bank are occupied, however.

The Green Line, formally known as the 1949 armistice line, drawn when the 1948 Israeli-Arab war ended, is the boundary between Israel and the West Bank. It’s technically a line and not a border, because it’s based on a ceasefire rather than a peace agreement.

In a statement, the Palestinian Foreign Ministry summoned Verrier-Frechette “to express its strong dissatisfaction over the meeting.”

“This is … not just a dangerous precedent, but it’s a deliberate and wilful violation of international law, and it’s direct blow to any attempts at peacemaking,” said Hanan Ashrawi, a senior member of the Palestinian Liberation Organization.

The Canadian office in Ramallah would not comment on the situation.

The Palestinian Authority, meanwhile, has written to Baird, denouncing his visit, Stoffel reported.

Baird told reporters that his meeting with Livri, during a two-week tour of the Middle East, doesn’t signal a change in Canadian foreign policy, adding that Canada is strongly supportive of both the Israelis and Palestinians.

Arab League Secretary General Nabil al-Arabi had said he was shocked by the East Jerusalem meeting.

On Friday, former Palestinian foreign minister Nabil Shaath called the visit an “unprecedented recognition of the illegal Israeli annexation of Palestinians’ occupied capital” and a “slap in the face to the Palestinian people.”

A staunch Israeli ally, Canada is among the few countries, including the United States, that opposed Palestinians’ successful bid for upgraded status at the United Nations late last year.