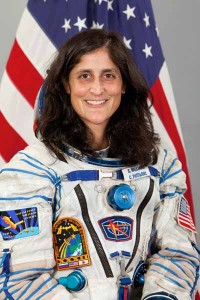 Record-setting Indian- American astronaut Sunita Williams along with two fellow cosmonauts safely returned to Earth on Monday from the ISS, touching down on the steppes of Kazakhstan, after spending four months in orbit.

Williams, who commanded the International Space Station’s Expedition 33 mission, and two astronauts, Flight Engineers Yuri Malenchenko and Aki Hoshide, touched down in the dark, chilly expanses in the town of Arkalyk on board the Russian Soyuz capsule at 0726 IST.

NASA spokesman Rob Navias said during the landing commentary, “The crew is home.” Williams, 47, Russian cosmonaut Malenchenko and Japanese astronaut Hoshide sported broad smiles after being extracted from their capsule.

They sat in reclining seats under thick blankets to stay warm in the frigid cold before being moved to a inflatable medical tent for post-landing checks.

The crew’s physical condition was “normal” after the landing, a mission control spokesman was quoted by RIA Novosti news agency as saying.

Some of the Soyuz’s landing activities occurred a few seconds late, causing it to overshoot its landing site, but Russian recovery teams were able to compensate for the change during the descent, Navias said.

The return of Williams, Hoshide and Malenchenko wrapped up a 127-day space journey, including 125 days spent aboard the ISS, since their launch from the Baikonur Cosmodrome in Kazakhstan on July 15 this year.

Williams, now has spent a total of 322 days in space during her two long-duration missions.

That makes her the second most experienced female astronaut in history, behind NASA’s Peggy Whitson (who spent 377 days in space during two station flights).

Sunita Williams, 2 astronauts return to Earth from ISS added by admin on November 20, 2012
View all posts by admin →