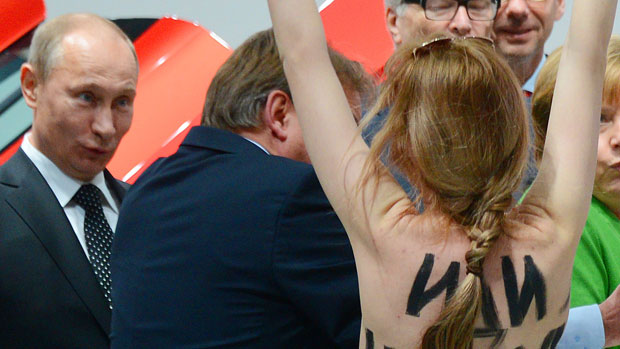 Several activists from Ukraine’s Femen group bared their torsos and chests — with messages painted in black letters on their bodies — in front of the industry fair’s Volkswagen booth as Putin and Merkel toured the fair.

Women from the feminist group shouted, “Putin dictator,” as they ran towards the visiting president. Guards tackled the protesters and detained them.

A smiling Putin shrugged off the protest.

“As for the action, I liked it,” he said. “You should be grateful to the girls. They are helping you make the fair more popular.”

Merkel was not amused. “Whether one has to resort to such an emergency measure in Germany and can’t say one’s piece some other way, I have my doubts,” she said.

Putin is in Hannover promoting Russia’s interests in developing foreign trade, such as further business ties with Germany.

However, Merkel criticized Putin for the Kremlin’s heavy-handed response to opposition groups and pressure on non-governmental organizations.

Last year, Russia passed a law requiring all NGOs receiving funds from abroad and engaging in vaguely defined political activities to register as “foreign agents.” After leading NGOs pledged to boycott the bill, Putin ordered wide-ranging checks of up to 2,000 such organizations across Russia to check their compliance with the law.